Viola Judy and I have received our chamber music assignment for BSO Academy:  Mozart’s Eine Kleine Nachtmusik.   We’ll be playing with Ivan Stefanovic, the Assistant Principal Second Violin with the Orchestra.  Joining us will be our friend Deborah on bass (she played in our quintet last year) and a new cellist we have yet to meet. Ivan will be playing the First Violin part with us.

The good news is that the Mozart piece is delightfully familiar (a sample below), and is really not all that difficult to learn.   Playing it well, on the other hand, is another issue!  Considering Ivan typically plays Second Violin parts — the part I’ve drawn — I better get this one nailed!

Another big summer event for string players in just around the corner.  Interlochen in Northern Michigan hosts the annual Adult Chamber Music Camp next month, for a full week of playing in small groups.  For those who can’t do the whole week, there’s also a String Chamber  Orchestra Weekend.  While I’m pining to go, my schedule this year – with Baltimore and all – just can’t spare the time.

Meanwhile, how does a professional violin player spend her summer?  Rebecca Nichols, the coach of our chamber group at the BSO Academy and a first violin player with the Baltimore Symphony, is spending her summer on a sailboat with her husband, sailing up the East Coast to Maine.  You can read about her experiences and see some great pictures on a blog she’s writing: Becky’s Sailing Adventure.  And, just because she’s sailing (or battling seasickness) doesn’t mean that she stops practicing.  She isn’t taking her best violin on the trip, but she is playing as they go!

Filed under Events and Calendar, Inspiration, Musicians of Note, Opportunities to Play

Friday afternoon, our String Quintet assembled for a final rehearsal before the Friday night chamber concert.   Our usual rehearsal space was occupied, but we were able to use the platform set up in the lobby of the Meyerhoff for the performance.  The acoustics were very different from the vestibule area we had been using, and we were able to make some adjustments that would pay off big time in the performance.

In all, more than half of the Academy participants had signed up for Chamber, so 17 groups in all were performing on Friday night.  There were string trios and quartets, flute trios, a double-reed quartet (three oboes and a bassoon) and a number of different combinations of brass. Our group was number 16 on the program, and I have to admit it was intimidating to play with nearly half of the professional orchestra members sitting in the audience!   We played the Scherzo from Dvorak’s Op. 77 String Quintet in G — a piece that was not familiar to most of the orchestra musicians (not many string basses play chamber music!). I played 2nd violin on this piece (the part played by the woman in the gold dress in this YouTube video.) We acquitted ourselves well and toasted each other at the end.

The only part of the orchestra not represented in the Chamber experience was percussion, but they had performed for us at lunch earlier in the day.  More than a dozen musicians beat drums, shook rattles, rang bells, played vibraphones, and even used a rain-stick on a piece called Rainforest Journey.   They were great (MUCH better than this YouTube video of a high school band) and we asked them for an encore.

Many of the amateurs found the Chamber experience a particularly meaningful part of the Academy.  Participating gave you extended one-on-one time with a symphony professional in your instrument, a small group to become very close to, and a piece of music that we could play just for fun.  Our group certainly bonded, sharing several dinners together at neighborhood restaurants, and introducing each other to our spouses as they began showing up for the final concert.

After a lighter day yesterday and a much-needed break, it was back to intense music today at the BSO Academy.  Our group’s rehearsal with the full orchestra and Marin Alsop wasn’t scheduled until 11:30am, so I had some time this morning for intense practice of some of my “trouble spots” in the orchestra program, and in the movement from the Dvorak String Quintet my chamber group is performing Friday night.

At the orchestra rehearsal, we received our final seating assignments, and I was surprised and pleased to see that I had been assigned to the 3rd desk in both the Second and the First Violins.  I’m sitting next to Assistant Concertmaster Igor Yusefovich in the First Violins.  He’s the engaging Russian who led our violin sectional on Monday. The assignment was even more surprising when the afternoon and evening showcased the amazing talent that is here among the 88 amateur (and mostly midlife!) musicians attending the academy. 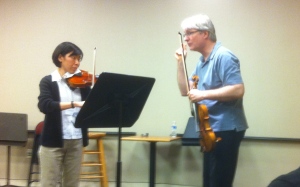 During the afternoon, Concertmaster Jonathan Carney led a master class for violin and viola players.  Eight musicians played.  Carney proved himself to be a master teacher, gently coaching each musician into a better sound or more musical approach to their playing.  I learned a lot from watching and listening, and am sure my own abilities to play will be greatly enhanced.   (I am planning to post many of the tips and concepts I’ve learned this week elsewhere on this blog in the next few weeks.  Stay tuned!)

After dinner, 24 musicians from the BSO Academy class played in recital at Meyerhoff hall.  Most were solo performances, with a few small groups thrown in.  There were performances by every kind of woodwind, brass instrument, and stringed instrument from the orchestra, but the real star of the night was BSO Violist Mary Woehr, who in less than two months prepared the piano accompaniment for all the musicians: 24 different pieces of music!  She endured hours at the keyboard helping the musicians prepare this week for what turned out to be a delightful evening.

Tomorrow, a long rehearsal is on tap, then a break for some yoga.  In the evening, 16 different chamber groups will perform.  I’m in group #2, along with Viola Judy, an ER doctor from Hershey, PA on cello, a doctor from DC on string base, and Rebecca Nichols, a BSO violinist and Interlochen Arts Academy graduate.